Today marks 5 years since the loss of a great person.  A person that makes you want to be better.  A person that inspires you.  A person whose individuality and unique personality make you uncomfortable–not because it is weird or odd, but because you wish deep down that you were so brave as to exhibit the same authenticity to the world.

This is sad and difficult for me to admit but my last conversation with Rob Kelly was a less than pleasant one.  It had been an extremely long day of training having started before sun up and ending well after the sun went down.  I was tired, drained, and irritable.  Rob wanted to train longer but it was already after 8PM.  All I wanted was to go home.  It would be after 9PM by the time I got there; I had a cat that still needed feeding and I needed a shower.  So my tone was a bit brusque tinging on the cusp of harsh when I said we were done.  I attempted to make up for this in a final text message that night when I relayed a message from our Commander that because we got off so late, PT was not mandatory in the morning.  Of course, Rob being the overachieving standout that he was, naturally showed up for PT the next morning.  He was an Officer after all.  I did not.  I allowed for my sour mood the night before to fall over into the next morning when the alarm went off.  There was no way I was getting up.  That morning, I did not care what kind of poor example I was setting by not showing up for one PT session.  That morning, I did not care about anything other than a couple extra hours of sleep.  I have wondered off hand sometimes if I had been there that morning if it would have changed what happened–delayed his departure for home that morning to retrieve the boots he’d forgotten at his apartment, maybe even convince him it wasn’t necessary for him to go home at all for them.  You see, Rob always showered and changed at the office and never went home following PT, but he had just purchased a new pair of boots that week and although he had a perfectly fine pair sitting behind his desk in his office, he wanted to go home and retrieve the new ones he had just bought.  He always had to look his best; he prided himself on it.

When I received the call that Rob had been in a severe car accident, I was stunned.  I also felt immediate and immense guilt for the tone of voice I had spoken to him in the night before.  All I wanted to do was tell him I was sorry.  Several of us in the unit took shifts at the hospital so his family would never be alone.  We alternated bringing meals.  I spoke to his parents and his sisters for hours–so many wonderful and beautiful stories.  When his kidneys began to fail, his father and stepmother had to make a decision that no parent should ever have to make in their life–to take their son off of life support.  We waited outside the big double doors for them to come out, praying, holding out hope that Rob would shock us all, give us a miracle to witness and talk about for years afterward.  Tragically, no such miracle was to be.  Instead, the doors opened and his stepmother came out sobbing, informing us he was gone.  Myself and a spouse of another Soldier caught her before she fell and took her to a nearby bench to sit down.  It was one of the most surreal, devastating and heartbreaking experiences of my entire life and military career.  I have been tasked with several challenging things over the years but none rank so high as the day I was asked to write and give a eulogy at Rob’s memorial.  Below is what only God could have guided my heart to say that day and I share it with you because this good person should always be remembered and never be forgotten.

“Good afternoon.  My name is 2LT Staci Lynch and I was fortunate to have had the opportunity to work alongside 1LT Robert Kelly.  Much of the thoughts plaguing my mind this last week I can only assume are the same thoughts plaguing your own.  Why him?  Rob greeted me every morning with a pat on the back and a smile on his face.  He high fived every success myself or another Soldier made albeit big or small.  When called to attention in Battery formation, no one yelled “No Rest for the Best!” louder… rattled my eardrums every time.  No one called up air battle tracks in classier Army fashion…”My track fife tree, my track fo-wer niner, bogey spades declare.”  He had to be phonetically correct every time…

The other night I went through my phone reading every text message that Lt Kelly and I exchanged back to December.  I found myself laughing as I came across some more of his “Kellyisms” I will call them:

The rest of the messages were simply immediate answers to the questions I would always need to ask him, or words of encouragement on long days of training…  “Ya’ll trained hard and long today.  I know you’re going to be just fine.”  When he didn’t have the answers, he sought out those who did… “I will work on it as best I can and get back to ya; I’m not sure how but we’re going to try.”  He always tried—the words “give up” were not in the man’s vocabulary which for those of us at the hospital last weekend, we bore witness to the fight he fought.

Though we were together for only a short time it was an honor and a privilege to have had the opportunity to serve with such a great man.  I think I speak for everyone when I say I am not sure I will ever meet again a person with a more genuine and beautiful soul.  I never saw the man frown—even when everyone around him may have been frowning or griping—he still wore his happy, Irish smile.  We are thankful for the time we were able to spend with such a remarkable and unique person.

Many of us have personal heroes, whether they’re parents or grandparents, teachers or coaches, historical figures, political leaders, athletes, or artists.  Rob’s hero of choice was Captain America.  While our heroes inspire us in many different ways and for many different reasons, our admiration of them usually boils down to certain virtues, particular traits that provide examples toward which we can aspire—we admire our heroes for their character.  And for some of us, our heroes embody “character” in a different way.  1LT Kelly, like Captain America, inspires us because he stands as an example of the best we can be.  He embodies all of the classical virtues that are just as important now as they were the days of the ancient Greeks, including, but not limited to honesty, integrity, courage, loyalty, determination, perseverance, and honor.  Rob Kelly possessed all of these virtues and more.

At his core, 1LT Robert Kelly, like Captain America, is a somewhat normal guy (because we all know neither Captain America and certainly not Robert Kelly was a normal guy by any stretch of the imagination, but of course in the best way possible), blessed with extraordinary talents and an awe-inspiring character, who tried to do the right thing whenever he could.  And that’s an example we can all strive to live up to for that is what the legacy of heroes is—the memory of a great name and the inheritance of a great example—1LT Robert Kelly, Alpha Battery’s very own Captain America.

“One day, a son asked his father, “Dad, why is it always the best people that leave us so soon?”  The father answered, “Son, if you are in the garden, which flowers do you pick?  The worst ones or the best ones?”  So I suppose the only conclusion I can come up with to answer the ever plaguing question  “Why him?” is that Heaven was needing a hero…a hero like your son, your brother, your friend, our fellow Soldier…a hero like Robert Francis Kelly.

God bless you Rob, your family, your friends and the Soldiers with whom you served.  You will remain with us always.  Rest in peace.” 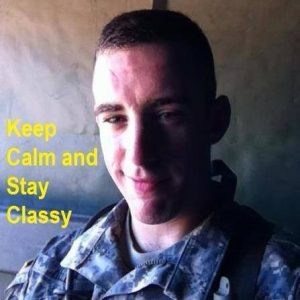 When bad things happen, including tragedies like the above, I always try to ask myself, “What is it I can take away from this to be better going forward?  What good or positive lesson can I garner from this pain?”  Well, the lesson here is an obvious one:  Never allow yourself to end a conversation with someone on a negative note because you never know if it could be the last conversation you have with him or her.  It is not a regret you want to live with.